“Most of all, if it is something that you really yearn for and are passionate about, then just do it! Just do it and see how it turns out!” 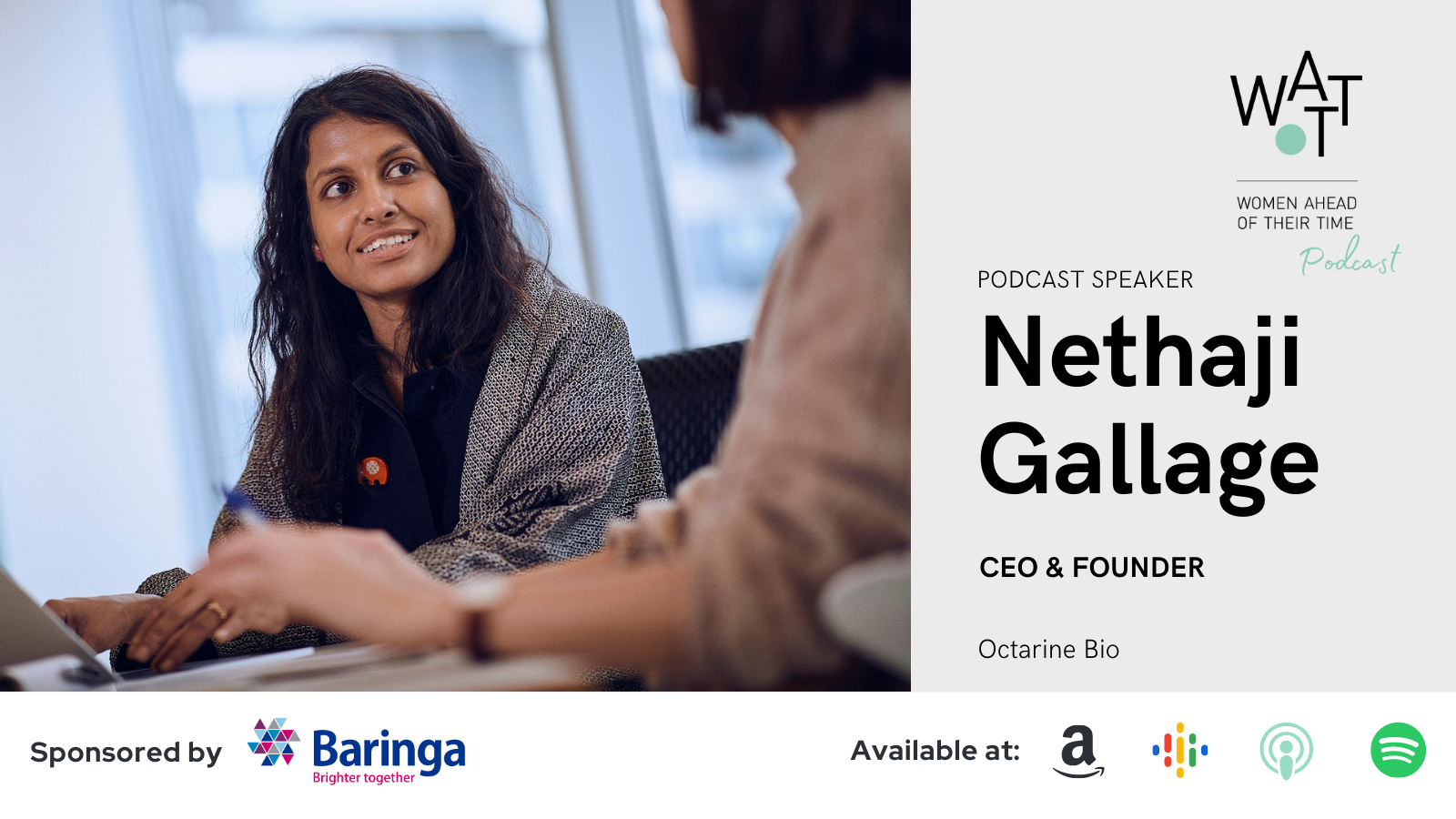 Our podcast guest last week was Nethaji Gallage who is the CEO and co-founder of Octarine Bio, a cannabinoid and psychedelics engineering biotech based in Copenhagen, Denmark. Octarine’s mission is to use the power of synthetic biology to develop functionally superior cannabinoids to be used by the pharmaceutical industry to improve the health and well-being of people worldwide. They have developed enzyme platforms to expand the chemical diversity of cannabinoids and other compounds, as well as fermentation platforms for production scale-up.

Nethaji is a scientist and a research group leader, she has worked with world-leading synthetic biology companies and has a track record of high impact publications. In today’s conversation with Nethaji, we will talk about the life of a start-up CEO, fundraising as a woman and company building.

For her Master’s degree, Nethaji studied Biotechnology and Biology at the University of Copenhagen and her favourite subjects were Biochemistry and Molecular Biology, which she still finds very exciting. She gained lab experience during her Bachelor’s degree and built on this during her Master’s course, which integrated a 12-month lab research project. This prepared her to obtain her PhD in Biochemistry, which focused on vanillin biosynthesis. Nethaji explained that she had always been fascinated by why plants produce fragrant molecules, why they need them and how they produce these compounds, which ultimately inspired her to pursue her PhD studies in this field.

“I wanted to do a PhD which involved applied research – not just basic discovery research. I wanted to be able to apply it to something else. Therefore, when I decided to do a PhD, I was looking for applied research projects and I applied for the vanillin research project at the University of Copenhagen, which involved a collaboration with a synthetic biology company based in Copenhagen and Switzerland. It really fascinated me that no one knew why this fantastic and most popular flavour was being produced in the plant. I couldn’t believe that at this stage, with advanced science, people still didn’t know how this kind of fragrant molecule was being produced.”

Following her passion for synthetic biology, Nethaji co-founded Octarine Bio in 2018. “Octarine started because when I was a University researcher, I was very driven by researching how synthetic biology could be applied and used in different fields. I had done a lot of research myself that I wanted to commercialise but I didn’t know how to do that. The first thing I thought about was starting a company, and I got a lot of help from my network, for example from the former CEO and founder of Evolva, and they guided me through the different steps required to establish the company. So I got the recipe of how to start the company through my network, which has been really helpful. And then we went through a business accelerator programme with Novo Nordisk Foundation, and that’s where we really got to understand how to run a business in the biotech industry. This taught us that the company needed to have a focus, and a story that is investable. We had a lot of cool stuff around cannabinoids, so we initially tried to focus on that, and then later we expanded to psychedelics, by bringing Nick’s research into Octarine. So it was a process; we started out rather unfocused, we knew the technology (which is the key thing), but we didn’t have a defined field to apply this technology in. Later we focused more and more on cannabinoids, psychedelics, and we built the story around the technology. So it’s a stepwise process.”

There is currently great interest in the fields of cannabinoids, psychedelics and psilocybins for medical use and exciting new data are emerging from this research. Nethaji had always been excited to work in this field because she knew that these molecules had health benefits. However, it was only once she embarked on the journey with Octarine that she realised how prevalent the medical use of these molecules was and the negative side effects that were associated with the currently available forms of these compounds. “I realised how many people within our network are relying on cannabis medicine, because they unfortunately have a critical illness where they depend on it, and these stories really affected me personally. I know that taking things like cannabis oil and so on, has side effects, so I really see that through our technology we can improve this and generate more targeted products that will have better health benefits for patients. In addition, within psychedelics, for both Nick and I, the mental health disorders are something that is very close to us. We believe that psychedelics can be first-line treatments for many debilitating conditions where there have not been any innovations. And if you look at clinical trial datasets that are coming out right now, it’s quite exciting what can be achieved in this field. This is important because now there’s clinical proof for the medicinal effect of these agents and these molecules can actually bring first-line treatments for a lot of medically underserved conditions.”

When asked whether it is easier or more difficult to fundraise for compounds that are sometimes regarded as controversial, Nethaji smiled and said “I think it can be both easier and more difficult. There was hype around cannabinoids in 2017 and 2018, and we started Octarine around the end of this wave. There was a gold rush of companies in the field that had not performed and so people were very sceptical. As a result, it was challenging for us to fundraise and even though we were there for the sake of the science, we had to navigate the scepticism and these barriers. Then the psychedelics industry picked up and we were one of the first movers there, but there’s a lot of scepticism and stigma in this field as well. As the psychedelic industry boomed just last year, new companies were popping up like mushrooms and the competition was on a different scale. So you really have to prove yourself to investors and it’s a tough run, but we are focused and we believe in our science and technology.”

As a CEO, Nethaji explained that she is involved in a variety of activities on a day-to-day basis. As Octarine is currently conducting a fundraising cycle, a lot of her time is dedicated to pitching to investors and meeting with shareholders and stakeholders. While as a CEO she has a large focus on the business side of Octarine, she also has monthly meetings with the research team to discuss their research progress and objectives, as well as meetings with the management team and regular meetings with the co-founder, Nick Milne. Furthermore, as Octarine has gained traction from different partners, including some start-up companies and also some bigger players, Nethaji also dedicates time to learn more about their technologies and explore whether there are opportunities for collaboration. She summarised that currently the job “feels like playing all the instruments in a band”, but she is very proud of the team’s achievements thus far, which is evidenced in their securing a $3 million investment that enabled the foundation of Octarine and which will go towards conducting their planned research. They have also managed to grow their team to seven full-time and five part-time employees, and they have established their own research lab, which Nethaji noted is a mind-blowing milestone.

Ola asked whether Nethaji had experienced any obstacles as a woman throughout her career. In response to this, Nethaji said “As I am in the thick of running Octarine now, I have not really had a chance to reflect on my journey as such. My life is busy with balancing three children and my work, and so I have not had time to reflect on this, but one day in the distant future I am sure that I will reflect back on this subject. But, yes, it is true that I often have meetings with investors and others, and the majority of participants are male. This shows that there is very little female representation at the leadership level in the business and investor world. I have experienced different things as a business leader and a founder but I don’t know whether that is because I am a woman, or because I am Asian or because I don’t speak native English – because there are different stereotypes, so I don’t know which category I was put into. But overall yes, there are certain challenges as a woman, founder and CEO.”

Finally, Nethaji’s advice to women who plan to follow a similar career path would be to “first of all, understand the importance of having the right people around you to support your journey. This could be family, because your work will take a lot of your time and effort, and when times get hard and you fail, you need people to encourage you and support you. In addition to this, when I started Octarine, I had a lot of advisors who guided me and that has been really helpful. So having a mentor, or mentors, that can help you at the different stages is a huge help, because how do you otherwise know something that you have never done before? But most of all, I think if it is something that you really yearn for and are passionate about, then just do it! That’s how I am as a person, so that’s what I want to tell you – to just do it and see how it turns out.”