Incurably curious: an agile mind that’s driven to do good 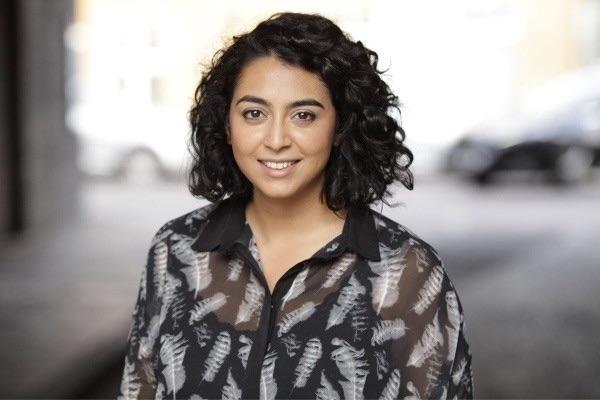 It was insatiable childhood curiosity that got Fatima questioning the world she saw around her from a young age. ‘I was one of those kids that would always ask “why?”,’ she says. ‘I kind of fell into science because it seemed like a good way to get some answers.’

Always determined, one memorable occasion saw her take a clipboard questionnaire onto the streets near her home, asking passers-by for their opinion on whether insects had lungs. Although she was just 8 years old at the time, this thirst for understanding would end up underpinning her STEM career.

A self-described ‘third culture kid’, Fatima was born to Pakistani parents in the UK but spent parts of her childhood in Saudi Arabia, Pakistan and the United States. It was her parents’ international medical fellowships that kept the family on the move, she explains.

As doctors themselves, Fatima’s parents felt medicine would be a good career choice for her, too. But Fatima had different ideas. ‘It didn’t really feel like that was the route I wanted to go down’, she explains. ‘It didn’t feel like I’d be able to fundamentally understand why diseases happen.’

While curing ailments is an admirable goal in itself, Fatima had always needed answers. ‘I went through this phase – which I don’t think I ever really came out of – of doing stuff just to see what would happen’, she says. As it happens, there’s a word for that: experimenting.

It was human genetics that eventually captured Fatima’s inquisitive mind. After completing a biology degree at the UK’s University of Nottingham, she applied for a PhD on the genetics of forelimb development at the former National Institute for Medical Research (now merged into the Francis Crick Institute).

Back then, she says, the process was remarkably relaxed: ‘My PhD interview was literally just a one-on-one session with me and my potential supervisor… so much of it was about me asking questions.’ Once again, it was perpetually asking ‘why?’ that gave her the chance to deepen her scientific studies.

As it turned out, her supervisor prized that quality above all others; he’d often say that lab skills were teachable, but curiosity and imagination had to be there already. ‘That’s what secured me the position’, Fatima explains.

While she enjoyed the challenge of her PhD, she couldn’t have imagined how gruelling a process it would be.

‘My PhD has always been – and still is – the toughest thing I’ve ever done’, she says. ‘I was really proud of what I did but, honestly, nothing I’ve done since then has been that challenging.’

It’s vital to talk more openly about the mental and emotional toll that such an intense, independent and often isolating research process can take, she explains. ‘People talk about how you do a PhD and it gets really bad before it gets okay… the truth is that when it gets really bad, it can get even worse’.

‘You have to have the sheer amount of stubbornness… to get through to the other end. It’s not even down to how clever you are, how much you work: it’s tenacity at the end of it.’

For Fatima, her aunt was a real source of guidance and inspiration while she completed her PhD. Having previously gained a doctorate in the politics around water resources, Fatima’s aunt helped her narrow her wide-ranging research proposal down to a single, driving narrative.

‘That lesson has carried me forward in everything I do’, Fatima says. Now Head of Research for medical research charity Blood Cancer UK, crafting a single, impactful ‘take-home message’ is integral to her work. Her current role is the ideal fit, combining her intrinsic drive to help people with her extensive background in lab-based research.

But it’s been a complex journey to get there, one that’s been marked by realisations that Fatima knows still need to be resolved. Following her PhD, she accepted a post-doctorate position in Florida researching the impact of androgens during embryonic development.

Half a world away from her family and placed in a rapidly expanding research group that was both pressurising and alienating, Fatima really struggled. At the same time, she found the lack of diversity around her deeply disheartening.

This was something she’d first been exposed to during her PhD in London. Growing up across various countries and cultures, Fatima had always felt fully represented in the societies she’d experienced.

‘It wasn’t until I got to my PhD that I was confronted with the idea that actually I am a minority’, she says.

Of the 20 PhD candidates in her cohort, she was the only non-white girl. Looking at her seniors, she saw no non-white group leaders and just one who was female. It got worse in Florida: there was not one non-white, female group leader in her entire post-doctorate department.

‘As a BAME (Black, Asian and minority ethnic) woman, I’ve struggled a lot with the prejudices and inherent inequalities that exist in STEM (science, technology, engineering, mathematics) culture’, Fatima says.

‘I don’t think the issue is getting young girls interested in STEM, I think the issue is that once they get into STEM, what are the options for them? The glass ceiling is still very much there. You feel you have to constantly fight for the right to work within a field that should be open to anyone with a curious mind.’

Her experience in Florida pushed her to the point of thinking “What on earth am I doing here? This is not a place I belong,” Fatima explains. ‘In retrospect, [that’s] not something I should have ever been led to believe’, she adds, but the stark realisation that scientific academia wasn’t a world she wanted to be part of did eventually come right.

On completing her post-doctorate, Fatima gladly left Florida behind her and moved back in with her parents in Birmingham, UK. She had no clear plan, but she didn’t let that faze her. Instead, she took 6 months to research, network and consider her new direction with unwavering parental support, a privilege that she’s really grateful for to this day. The one thing she did know was that – despite the difficulties she’d experienced – she wasn’t going to let the years she’d dedicated to academia go to waste.

She approached various management consultancies, as she’d heard they often took on employees with PhDs. But she soon realised the work wouldn’t sit well with her conscience: ‘I came away thinking: “while the work sounds interesting and I’d learn a lot, I’m just helping corporations make more money.”’

She also had the confidence to turn down entry-level jobs she knew weren’t a good fit, before eventually seeing an opening at Cancer Research UK that piqued her interest. It looked like it was time to leave the lab life behind her and enter the world of the office. She joined the charitable organisation in September 2013 as an unpaid, 3-month intern, and ended up staying for 5 years.

Working across fundraising, corporate projects, project management, policy and campaigns, Fatima developed her knowledge and skills as she worked her way up to a senior manager role. ‘That’s always been my biggest strength, that willingness to learn, that need to learn’, she says.

With strategy skills added to her repertoire, Fatima decided to move to a Head of Research role at a far smaller medical research charity, Scleroderma and Raynaud’s UK. While there, she developed the organisation’s research strategy, cultivating experience that ultimately led to her current role at Blood Cancer UK.

Now, her day to day work centres on accelerating the rate of scientific research so that people with complex health conditions can benefit sooner rather than later. For Fatima, it’s the balance of her drive to find meaningful answers and her background in lab-based research that she’d been seeking.

But that’s not to say her transition from academia to the charity sector was without its difficulties: just the opposite. It was networking that kept her positive, she explains, as she met other women who’d successfully made similar career changes.

That’s advice she wouldn’t hesitate to give other women looking to widen their STEM horizons:

‘Network, network, network… even if it’s not something you feel comfortable doing. Networking doesn’t mean that you have to go up to somebody at a party and… give them your business card, it literally means just say hello. More often than not, an open approach will gain you traction: 9 times out of 10, somebody is willing to sit down with you over a coffee and give you that [career] chat.’

‘But at the same time,’ Fatima adds, ‘it’s incredibly important not to compare your own journey to other peoples. Listening to highly accomplished women at conferences and seeing the achievements and publications your contemporaries share online can undoubtedly be inspiring,’ she says. ‘But it can also be demoralising, and there’s nothing wrong with admitting that.’

‘It always makes it sound like they knew exactly what the next step was, whereas the opposite I think is true’, Fatima explains. ‘It’s okay if you don’t know what the next step is, you’ll figure it out. You just have to have that faith in yourself… the bottom line is it will be okay.’

Courage in your convictions is vital, too. ‘Sometimes we think that maybe we need to be a certain way, or be a certain type of person to make it’, she says, ‘but young women aspiring towards a career in STEM need to realise the value of their own unique thoughts, feelings and ideas’.

She knows just how motivating that can be, as she was lucky to develop that confidence and cognisance while she was growing up. Now, Fatima is driven to support the same qualities in BAME young women pursuing STEM careers: ‘I realise that I’m able (in some small way) to be the representation for them that I didn’t have. That’s what keeps me going.’