From Farming to Pharma

The chemist from an asparagus farm 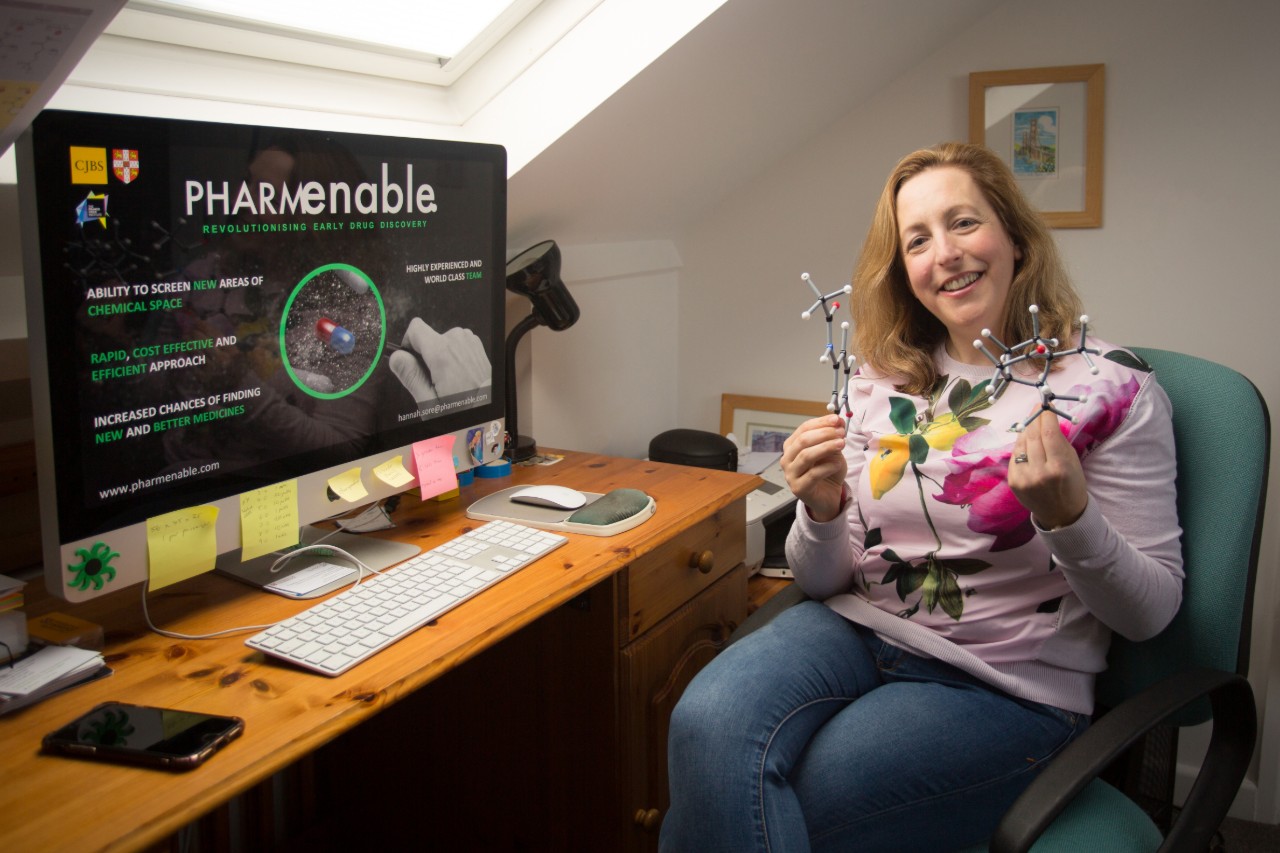 Dr Hannah Sore is a medicinal chemist, business consultant, and the founder and CEO of PharmEnable – a drug discovery company using artificial intelligence (AI) and medicinal chemistry to unlock novel parts of chemical space and develop a new generation of small molecule drugs. The aim is to make a difference to patients by developing new treatments for disease areas of severe medical need. Humble and deeply passionate about her mission, her journey starts, of all places, on an asparagus farm.

‘My dad always dreamed of owning a farm. He grew up on a council estate with 5 brothers and little money. Everyone around him thought his dream was ridiculous – that you had to be rich to own land. But he worked hard, saved up money working in a wide variety of jobs including a steel foundry, and was eventually able to purchase some land.’

‘So I grew up on an asparagus farm. I had lots of animal friends, and used to drive tractors since I was young. My dad is a huge role model and source of inspiration for me. He brought me up to believe that if you try hard enough, you can achieve anything.’

Academically gifted, she was noticed by her form teacher, who encouraged her to pursue maths and science. She surprised everyone by excelling at her General Certificate of Secondary Education (GCSE) exams, then went on to do well in her A-level exams and got into the prestigious Collingwood College at Durham University.

‘I went to my local comprehensive school and did my best to blend in. But I memorised all the lessons during classes, and could rewind those memories on exam day and do the questions. My brother and I were the first in our family to go to university.’

Driven by a sense of justice and a drive to help people, she originally wanted to pursue a career in forensic science. During her degree, she found she really loved the biology and medicine aspects of it. She wasn’t as keen on analytical chemistry, which turned out to be a big part of forensic science. So she ended up specialising in medicinal chemistry, and going to work in industry after her degree.

‘When I first got into Durham, my school actually put a board up in the assembly hall to celebrate, listing the names of all its students who went to university. At the time, I wouldn’t have dreamed of getting into Cambridge University. I didn’t even think about a PhD really. So I finished my degree and applied for jobs in industry working as a chemist.’

It’s all about the people

Working in industry, she discovered her natural talent for people and management.

‘I just love people. I found that I could happily speak to a wide range of people, and I’d regularly end up managing projects whether or not it was officially part of my role.’

‘At one point, when Millennium was about to acquire CDC, the staff voted on who they wanted to represent them to Millennium, and they chose me for this. So I flew to the US to negotiate with Millennium on behalf of CDC staff. I loved doing this, and that people had placed trust in me like that.’

It was her love of people and management that eventually made Hannah seek out a PhD in 2007, after 7 years in industry.

‘I realised that I wanted to be managing projects, and in the industry I was in, not having a PhD was holding me back. I knew that I was capable of being a good manager, so I thought – I’ll go and get the PhD then. By this point, I’d built up my confidence enough, that I applied for a PhD at Cambridge and was accepted.’

‘I think it’s important to figure out where you want to be in your career, and what level of education you need to get there, and then just go for it. The overall goal might be intimidating, but I try and break things down into small steps and just do it.’

‘Authenticity is really important to me, and I wanted to figure out what felt true to me. During my PhD I had the opportunity to explore who I am and what I enjoy doing.’

Not one to do things by halves, Hannah’s journey towards authenticity included everything from organising Cambridge dinners to jumping out of airplanes. Her adrenaline-fueled activities during this time included skiing, skydiving and black water rafting. And alongside that, working with a diverse range of people and making good friends.

‘I never imagined I would be at Cambridge, so I really threw myself into all the opportunities that it had to offer. At Caius College, I joined the MCR committee and organised joint dinners all over Cambridge.

The highlight of this time is when I organised a meal with Caius fellows, and Stephen Hawking wanted to sit next to me over dinner. It was the most humbling experience I ever had. I’m so inspired by him never giving up in spite of the obstacles he had in his life.

We had a good chat. He wanted to hear about my research. He also told me that he really likes asparagus.’

‘I was just really happy being me. I was determined to be authentic, and wanted to surround myself with people who add to my life. I met some wonderful people during this time.’

The quest for new medicines

After her PhD, Hannah joined the consulting firm Frost & Sullivan in 2010, first in the chemistry part of the business, and later moving to the healthcare part to pursue her long-standing interest in healthcare and medicine. She was promoted to a project manager only months from joining, applying her natural gift for people and management to her new career.

‘It was a great time in my career. I worked on a wide range of projects, and it really taught me to think on my feet.’

Everything changed in 2012, when a minor infection turned overnight into antibiotic resistant septicaemia.

‘I was in hospital for 3 weeks and nearly died. It really makes you re-examine your life priorities.

They kept giving me different treatments, and nothing was working to start off with. Eventually they identified a combination of drugs that was effective. I was lying in hospital thinking to myself – I’m a medicinal chemist. I can change this. I promised myself that if I survived, I’d go and make new medicines.

I really feel like it’s fate, that something like this happened to someone with my skills. It meant that I could go and do something about it.

I came out of the hospital 2 sizes smaller, but I survived.’

So it was that in 2012, Hannah quit her consulting job and went back to Prof David Spring’s research group at Cambridge, where she originally did her PhD. She used her management skills to help manage the growing lab, while at the same time looking for innovative solutions for designing the next generation of small molecule drugs.

Her academic work inspired the development of the PharmEnable platform, and in 2016, she co-founded the company with her Cambridge colleagues.

‘Our solution focuses on 3-dimensionality and chemical diversity, tapping into novel chemistry that hasn’t been explored before, and turning it into high quality new medicines. I think of us as explorers of the chemical universe.’

PharmEnable has been growing from strength to strength, lining up an impressive team and large pharma partners.

‘The most important thing to me is the people. I want to build a company where people can be authentic, and also to make sure that people can develop and achieve their goals through working with us.

I think my background has made it easier for me to recognise where there might be an untapped skill in a place where you’re not expecting.’

About confidence and success

Despite her stellar track record, Hannah has struggled at times with confidence and impostor syndrome throughout her career, and is quick to mention the number of times that she has been ‘lucky’.

‘Coming from my background, I never even dreamed of doing so many of the things I’ve ended up doing. It’s easy to end up feeling like I shouldn’t really be there.’

However, alongside this, there’s a grit and steely determination that comes from having overcome obstacles time and again throughout her life.

‘What I’d advise people is that – it’s ok to have impostor syndrome. You can’t really just say “make it go away” and have it stop. What’s important is to not let it stop you’.

‘I’ve had so many moments where I felt uncomfortable doing something, and I’d tell myself to jump in and do it anyway. At the end of the day, if you don’t reach for something, you’ll never get it. And I’m deeply committed to living a life without regret.

For me, that means tapping into my desire to be successful, as well as what drives me – seeing the people I can make a difference to.’

In 2020, in the middle of lockdown and a global pandemic, PharmEnable closed a £1.8M funding round. Since then, it has been growing a dynamic and passionate multi-disciplinary team, focused on delivering an asset rich pipeline of safer and more effective drugs. Perhaps a tribute to Stephen Hawking and the people who inspire us.

‘I really believe you can achieve anything if you try hard enough. I think there is extraordinary within each one of us, and that we all have the power to follow our dreams.’