Childhood loss, and a personal crusade to beat cancer

The death of a childhood friend, and her own brush with cancer, set Pahini Pandya on her quest to fight the disease and save thousands of lives. ‘Making a difference, that’s what life is all about for me,’ she says. 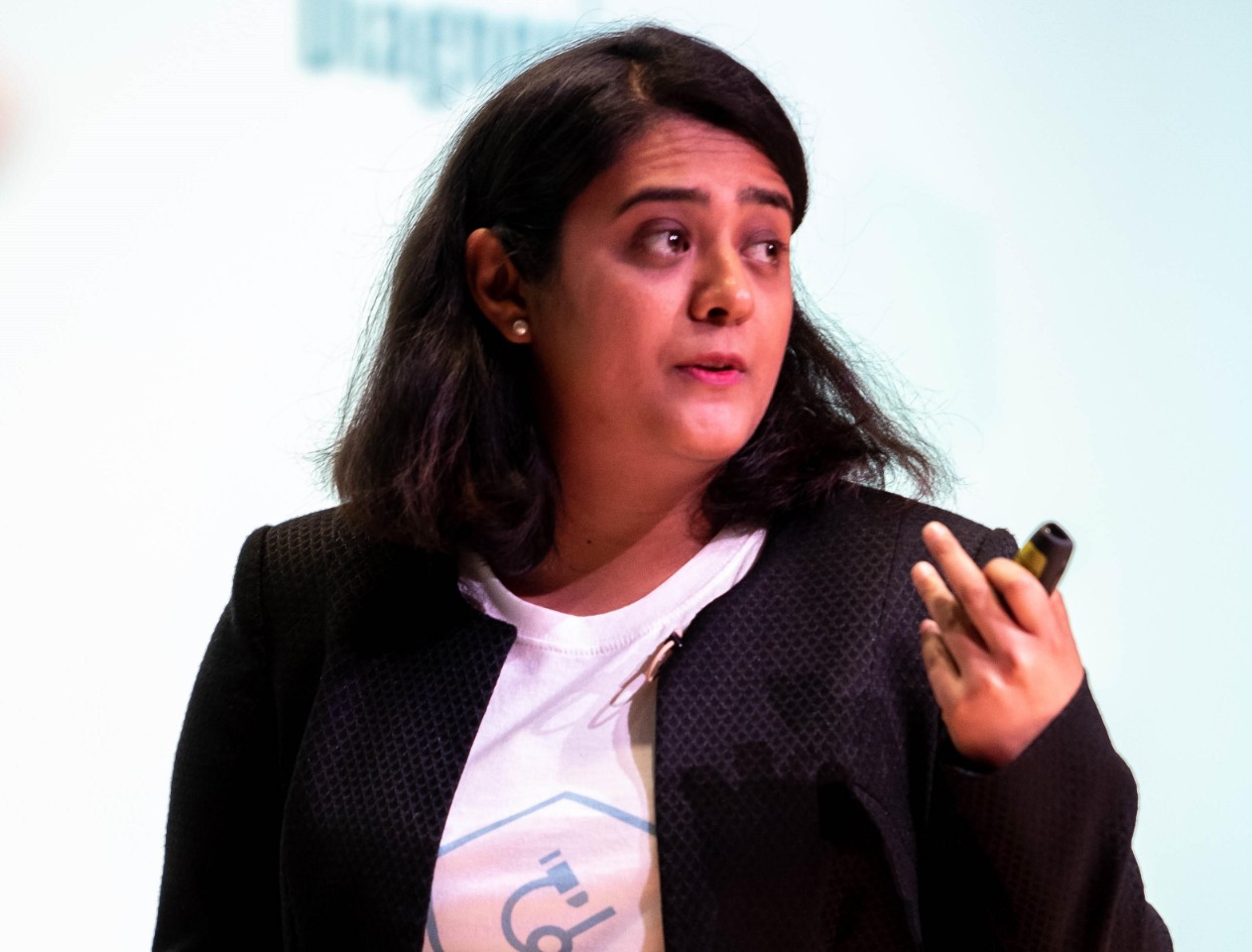 The death of a childhood friend, and her own brush with cancer, set Pahini Pandya on her quest to fight the disease and save thousands of lives.

Making a difference, that’s what life is all about for me

‘And I’ve got one major tip for success. Never give up. Obstacles get in your way all the time. That’s just the way it is. But keep going and you’ll be surprised what you can achieve.’

Pahini began her journey of determination early in life. She was only eight years old when she decided what to do for a career.

‘I think that was the influence of my grandfather. He was a professor of mechanical engineering and I looked up to him so much. He was a big factor in me wanting to be a scientist. And Cambridge is renowned the world around, not least in India where people talk about it as the place to be a scientist, so I knew it was Cambridge for me.’

But it took a long journey before she reached the ancient city following which she now runs a business dedicated to using artificial intelligence to develop new ways to diagnose cancer.

Pahini was born in Ahmedabad, a town in Gujarat, India. It was the influence of her beloved grandfather which led her to a career in science.

‘Navinchandra, was a professor of mechanical engineering and made a huge difference to the lives of thousands of students. He really inspired me with his inner strength and perseverance. When he was pursuing his PhD in Germany, not only was he required to learn German in order to get his PhD, he managed to finish his studies in two years as he had a family back in India’.

Pahini worked hard through her school years, always with the goal of becoming a Cambridge scientist in mind. But as she was preparing for the critical step of going to university, at the age of 16, a tragedy struck.

It was one which would shape the course of her life. A childhood friend was diagnosed with leukaemia.

‘It was so shocking; I didn’t know how to cope. But he was so positive throughout it was amazing, and all I could do was be there for him, and try to be positive, too.’

At 17, Pahini went to university to study Biotechnology. Unusually for a young woman in India, the institution was hundreds of miles from her home, in Pune, Maharastra.

And so came another of the challenges which Pahini has faced throughout the years, and overcome. She was in a new city, didn’t speak Marathi, the local language, and felt isolated.

‘It could be lonely, with everyone else chattering away and you not knowing what was going on. I struggled with everyday life, just little things like getting the right bus.’

But Pahini had a solution, albeit a demanding one. Alongside her studies, she learnt Marathi. And despite all she had to cope with in her university years, graduated with a first-class degree with distinction.

Now aged 20, Pahini knew she wanted to study for a doctorate in the United Kingdom. But then came another twist. The year was 2009, just after the financial crash. Funding and places for international students were fewer than before.

‘I got turned down as an international undergraduate. But I wasn’t going to give up’.

‘So instead I applied for master’s degree,’ she says. ‘I was just determined to get to the UK.’

Pahini’s persistence was rewarded with an offer to study Cellular Molecular Biophysics at King’s College, London. One of her heroes, Rosalind Franklin, was a big influence on the course she chose.

‘Her not getting the Nobel prize for the DNA structure, that really frustrated me,’ Pahini says.

‘I wanted to do my little bit to show the world that women can do these things, and should be recognised for their achievements.’

Completing her masters, Pahini returned to applying for PhDs, but the funding cuts were still widespread and limited her eligibility to apply for several scholarships.

‘I got a bit upset about it,’ she admits. ‘But then I did some research and realised there was a solution.’

Pahini noticed many PhD students also had scientific work experience, and/or publications to their name. So she set about adding both to her CV.

She secured a job as a research assistant at King’s College, and succeeded in getting a scientific paper published.

‘Basically, I was just determined not to be beaten,’Pahini reflects. ‘And it worked in the end!’

In 2012, she began her PhD in Cancer Biophysics at King’s College, an area of study inspired by the loss of her friend.

‘My friend’s experience helped me through really tough periods in the lab when nothing worked. I kept reminding myself of why I had pursued science, and that spurred me on to keep going.’

After four years of study, Pahini received her doctorate. She made important advances in understanding how cancer cells spread around the body, which could help lead the way to new treatments.

But those years of her PhD also threw up a frightening challenge, perhaps the biggest Pahini has faced.

Two years into her studies, she suffered her own cancer scare.

‘I wasn’t feeling well and was referred to an oncologist. It was terrifying. I didn’t tell any of my family, or friends.’

The ordeal lasted a full six months before Pahini was given the all clear. ‘I just tried to block it out, and keep working through it,’ she says. ‘But having my own cancer scare made me realise the real world challenges of diagnosing cancers. This really spurred me on with my work. It felt so very personal.’

Now armed with her doctorate, and back to full fitness – the cancer scare turned out to be a minor issue, a vitamin D deficiency – Pahini finally realised her dream of becoming a scientist in Cambridge.

Against strong competition, she was given a job as a researcher at the prestigious Medical Research Council Cancer Unit. But now came a surprise which produced another unexpected, and profound challenge – what to do with her career.

‘After my experience, I realised academia and research just didn’t feel right for me,’ she says. ‘It was too slow, too focused on publishing the next big paper. It wasn’t enough about making a difference to people’s lives.’

And so, after looking at her options, Pahini sensed another potential path which could provide fulfilment.

‘I had already been dabbling with entrepreneurship during my PhD, so I decided to explore further. Cambridge has such an entrepreneurial ecosystem. I loved the energy and spirit, particularly amongst start-up businesses.’

Pahini developed an idea for a company, pitched it at a Cambridge University Judge Business School Venture Creation Weekend, and won a prize. From there, Panakeia Technologies, which uses artificial intelligence to improve the detection of skin cancer, began to take off.

‘The prize really gave me a push towards entrepreneurship,’ she says. ‘Eventually, I had to convince people I was worth working with, and investing in. It wasn’t easy, starting from nothing, but I didn’t give up and managed to do it.’

Now with a team of seven, the company has won a series of awards for its work and is looking to grow further.

‘Sometimes it feels surreal, how my journey has played out’, she says. ‘When I think back to how my parents worried when I decided to move hundreds of miles away to university when I was in India, but I showed them I could look after myself. Then I learnt about a new country, here in England, and then how to get on in business’.

It’s not always easy, but you’ve got to believe in yourself.

Sitting in the heart of Cambridge, the famous city she dreamed of as a young girl, reflecting on her life, Pahini concludes that the following principles have guided her.

‘When I was eight, I realised that if I was going to be spending my life working, I wanted to enjoy what I did. I knew I wanted to help others. And I quickly learnt that not giving up is critical in life. Every time I failed, I analysed, improved and tried again with something better than before. What I learnt is that not only perseverance, but also the ability to improve every time you are rejected, is important. If you genuinely want something, don’t take no for an answer. You’d be amazed how far persistence and your hard work, can take you.’